Where We Becomes Me

Accidents happen, including religious ones

In the summer of 2015, my roommate Kathleen and I decided to do the whole “quit your job and go backpacking through Europe” thing. We wanted to “find ourselves” and “expand our worldview” and “meet foreign men with sexy accents.”

Over many nights and many travel guides, we plotted out our two-month European stint: we’d fly in and out of Ireland, and make our way through six other countries in between. We mapped out our routes, booked our plane tickets, made packing lists, and created an hour-by-hour itinerary for our moms.

During those two months, in between the Eiffel Tower and the Leaning Tower of Pisa and the Alhambra, we’d decided to get un-touristy for a couple of weeks and volunteer for an organization called WWOOF. This organization connects travelers with farmers seeking light daily assistance on their land, in exchange for free room and board.

We thought volunteering for WWOOF would help us “become one with the earth” and “connect to a culture in an entirely different way” and “lose all the weight we’d inevitably gain in France.”

We chose Italy, since it was our halfway point, and joined WWOOF Italia months before our trip to start searching for farms. We perused through hundreds of profiles, very similarly to the way you would on OK Cupid if what you were looking for in a relationship was running water and someone who speaks conversational-level English. We filtered through the ones that met our needs, and sent emails to the ones we liked best.

After hearing back from multiple farmers, we finally settled on a place in Cuceglio, a town two hours outside of Milan. It had reasonable work expectations, a private cabin for volunteers, and (cue heaven sound effect) electricity.

We were also drawn to the farm’s heavy emphasis on community. There were multiple families living there, from individuals to couples to full-on families with kids. All units came from diverse cultures and backgrounds, and everyone helped out with daily chores and meals.

Oh my, what a bohemian lifestyle we were about to be part of!

So one afternoon, after four weeks in Europe traversing through castles in Ireland, vineyards in France, museums in Spain, and coffee shops in Amsterdam, we boarded a small bus in Italy heading to a tiny town we could barely pronounce. After a bumpy two-and-a-half-hour bus ride, we got off and walked up a long dirt road to the farm entrance, shrouded in naïve anticipation.

One of the first things I noticed, between the cow pastures, fields of corn, and tomato vines, was the Tree. I capitalized the “T” because any object adorned in thin gold chains and prayer beads, and coated in multicolor paints, deserves a capital letter.

They must be really artistic here.

I brushed it off.

We eventually found Leone, the person that we’d been coordinating with the months before arriving. With the small bits of Italian that we knew, we politely introduced ourselves while taking in the wide open space of the farm. He provided us with one diplomatic handshake apiece, and, in broken English, offered to show us around. 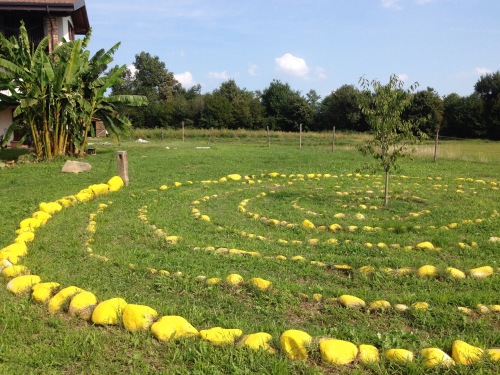 That’s when I saw the spiral. Approximately the circumference of one of those above-ground pools that were really popular in the nineties, this stone-spun spiral rested dead center in the middle of a large, otherwise empty field just outside the main house. Still clouded with the enchantment of being on a lush Italian farm (“Look, Kathleen, a pony!”), I quickly forgot about it and continued on.

Leone led us into the main building, the building that housed the kitchen and dining room, the place where all of the meals were cooked and shared together. He left us there briefly while he checked on something out back, but invited us to roam around and scope out the space on our own before finishing the tour.

The dining room was decorated like you would’ve expected: large tiled floors, big oak table in the middle, couches off to the side. Then we looked to the left; small painted animals adorned an entire wall in a unified mural. Above them, in bold, black, committed letters, was scrawled: Where We Becomes Me.

Puzzled and pretending we didn’t notice it, we wandered into the kitchen and met a German woman named Angela chopping peppers for dinner. She was overly enthusiastic, and we chatted briefly while we waiting for Leone. “How has your trip been so far?” “Have you ever worked on a farm before?” “Have you met anyone else in the house yet?” “So did you know we all have animal names?”

She continued cutting the peppers nonchalantly as if she had just asked if we knew that it snows in Italy sometimes.

Kathleen and I looked at each other.

Leone returned shortly after, and led us down the path to our cabin. “Here is the cow field to your right,” he pointed. “Your cabin has running water that you can use, but don’t drink it straight.” Also, “There’s a small kitten living there for the time being.” A pause while we continue walking. “So do you know much about the Federation of Damanhur?”

It hit us like Bruce Willis in The Sixth Sense when he finally discovers he’s been dead the whole time.

The giant field spiral, the Tree, the animal names, the mural…

We had entered into a cult.

I had that thought that everyone says as joke whenever they’re staying in a remote cabin, driving down an isolated highway late at night, or are home alone during a dark thunderstorm.

“This is how horror movies start.”

This time, however, it wasn’t accompanied by nervous laughter, but instead was followed immediately by the very serious thoughts of “Will we ever see our parents again?” and “Are we going to be in the news?” and “Does this mean we’re going to miss Oktoberfest?”

Over the next few days, these fears were not assuaged. The farm saw rain that seemed like it would never end. The WiFi was down for a suspiciously lengthy amount of time. One morning while trimming tomato vines, Kathleen and I stumbled upon a pancake-sized spider with – and I’m serious – FANGS. Fangs.

In our downtime, because this seemed like a good idea, we looked up everything we could about Damanhur. It has its own Wikipedia page, if you were wondering, that explains exactly how they turn an entire community of individual “We’s” into a singular “Me.” It also has hundreds of supporters, and, like any good cult, many critics as well. Which worked well in enhancing our fears considerably. We spent hours in our private cabin, its tin roof loudly pummeled by rain, discussing the “what ifs?” of leaving early. We were, after all, cold, wet, miserable, and terrified, and still didn’t know what kind of weird religious commune we had stumbled into.

The next day rolled around, our bags on the verge of being packed and our bus tickets nearly booked. And then something amazing happened.

The sun came out.

And on that day, we had finally started adapting to our living situation. And to that random kitten in our cabin.

And it was also the day we’d forgotten about the fangs.

And, with the sun, adaptation, and fang-forgetting came the realization that…regardless of its Yelp reviews, no one on this farm wanted to kill us – or worse, convert us. We weren’t going to be in the news. Eventually we realized that…well, we hadn’t landed in the black-and-white Nikes, Kool-Aid kind of cult. And perhaps, dare I say, this was not even a cult at all, but simply a commune that followed a very unconventional spiritual belief system and an overly-zealous leader.

As it turns out, no one joins a cult without a beguiling story to precede it.

Finally, I allowed myself to integrate into their lifestyle. I prayed to the Tree (that I later learned was called the “Tree of Life”). I walked the spiritual spiral. I was even asked to participate in some of their annual Olympic events (…a story for another time).

I FaceTimed with my mom one evening, and told her about this epiphany. She jokingly suggested that perhaps I was just becoming brainwashed.

…I knew she wasn’t actually joking.

After our volunteer time had come to an end, we said a very sorrowful farewell to the community that we’d gotten to know over the past two weeks. We would miss the communal meals, the yoga lessons, the culture.

And you know what? Maybe their ideas weren’t actually so crazy. Maybe there was something to that spiral. Maybe those animal names were very meaningful. And maybe I did feel a certain awakening while praying to the Tree of Life.

Now this is the point in the story where I turn to you with a plastered-on smile, hold my hands out, and tell you that I’ve got some Good News…